In part 1 (here) we provided insight into our research question, which was to explore how informal network add to the success of the neighbourhood management system in Gropiusstadt, Berlin. We also shared some of the history of the area- a mammoth urban vision on the periphery of the city that has become a space for the elderly and socio-economically marginalised. Here we share some of our findings, thoughts and musings about the Planning Juggernaut.

It is important to point out that our reflections are based on a limited research period and also limited by inability to speak German. Rather than an accurate portrayal of the Neighbourhood Management system and Gropiusstadt we hope that we present fresh reflections about city-making processes and participatory governance structures. 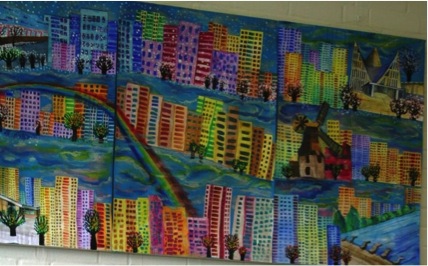 The main objective of the Neighbourhood Management Project of Gropiusstadt is networking, connect the civil society organizations and the institutions that are already involved in the neighbourhood, create a bigger structure that improve both, the individual actions and the impacts of these organizations. Therefore, within the framework of the Neighbourhood Management Project in Gropiusstadt the initial hypothesis of the research was not correct. Due the particular function of the Project and the type of neighbourhood, the relationship between networks is always formal, or very quickly formalised. This formalisation meant that instead of a dependency in just one direction what we found was more a partnership between the particular institutions with specific objectives. The representatives of the neighbourhood management structure could not identify any informal networks that connected directly to their own work, rather the hierarchical structure was such that formal organisations dealing with specific community problems worked directly with the neighbourhood management system.

This may also reflect something about the nature in which cities (and their various mechanisms) including a structure such as the neighbourhood structure engage with individuals. Often because it is easier for structures engage with other structures, but some thing is sometimes left out. This was clear in the students’ presentations, which we attended. The students had consulted with the neighbourhood management structure and spent some time on Gropiusstadt, but the actual residents were mostly shocked and disappointed by the suggested mechanisms to improve their neighbourhood. There appeared to be some disconnect, not due to lack of skill, imagination, knowledge (these were excellently represented by students) but a lack of connection with the lived reality or everyday experience of the residents of Gropiusstadt.

This lack of participation can also be explained due the particular function of networking of the Project; in general the engagement of the community of Gropiusstadt is related to particular necessities, interests and purposes of an specific group of people, meaning that it is difficult for this community to enrol in a long-term process that covers a bigger scale than their particular and immediate necessities.

This is a concern of neighbourhoods globally it is difficult to involve community members in longer-term improvement of the neighbourhood for future generations and the city as a whole, rather decisions are based on immediate improvement mechanisms. This type of formalised participation sometimes also requires a level of time, energy, knowledge, skill and interest that the majority elderly and migrant residents may not possess.

Even though the Neighbourhood Management Project in Gropiusstadt is considered a successful project in the context of Berlin, there is not enough statistical data (both quantitative and qualitative) to prove this statement. The measure of the particular problems that the program seeks to solve, are related to the specific issues that the civil society organizations deal with, and these organizations do not have enough resources (time and money) to produce data to provide quantitative information to measure their impact.  Therefore, the main statement in terms of the success of the project is related to what would happen with the structure of the networks if the Neighbourhood Management Project were not present anymore. What would the networked structures lose? In particular the Neighbourhood Management provides an annual budget for the community organisations to decide how it may be spent to improve their own neighbourhood. Beyond resources, what other intangible benefits does the structure provide?

The project was fascinating in many ways; firstly the hypothesis held by the researchers was proven to be incorrect. This is interesting for researchers and calls for yielding to the process, rather than holding onto pre-convinced notions of how localised city governance works in Berlin. The results were different from what is experienced by the researchers in the context of the cities in which they have lived and worked. This called for a re-evaluation of values and norms by which researchers analyse the world. This was true in terms of not only the major research hypothesis, but also the measurements of success used by the Gropiusstadt Neighbourhood Management project. Analysing the problems of a city like Berlin from the perspective whose primary experiences are from developing countries, called for reassessing the different values and urban challenges of both realities. But what we found was still a gap in the lived reality of the inhabitants of Gropiusstadt to the grand architectural and planning vision.