by Trusha Mitha and Tebogo Ramatlo

A former industrial building by Klaus Kirsten the architect is now a space of artistic expression and skills development. Artists were allowed to inhabit these old buildings and since there were no more industries and workshops. There was an uncertainty about the ownership of these estates and when artists showed value in these spaces – property prices went up.The building now employs new functions namely, language classes, carpenter workshops, office spaces, artist studios and metal workers – they all have a creative core and dock on other industries.The informality of the development, is the way in which the the whole compound developed, how artists that took initiative to finance a project that was not found feasible by higher authorities.

Former Berlin Verkehrsbetriebe (Berlin Municipal Transport Services) garage now resides as a theatrical,music production and performance space. The transformation of the space was a movement of artists in collaboration with the federal government. The studios are used by several formal teaching institutions and independent artists as well.Multi-disciplinary professionals were involved in the transformation of this building into a functional theater production space, both for rehearsal and performance.

Public bath house showers people with sensational orchestra music. A closed down public bath in Gerichtstr. 65, 13347 Berlin is now re-opened as a cultural centre which focuses on expressive and creative arts. The building functions on two levels, depending on varied and fixed functional aspects. The event spaces take place in the swimming pool areas, and spaces are adapted to suit the events. The fixed functions, such as the studios and work areas, are located in the changeroom areas. 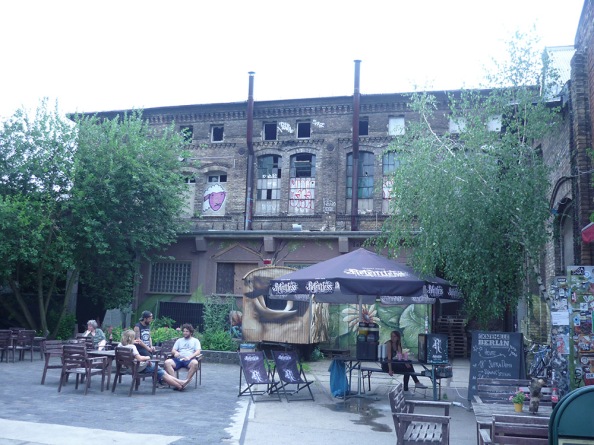 Raw “Reichsbahnausbesserungswerk“ is an inter-cultural project in the post industrial complex constructed in 1987. The space identifies itself with colourful graffiti walls that house cultural activities like skating and rock climbing. The bunker that was used protect workers from missile bombings during war is now used as a rock climbing wall around its external façade.

One thought on “Places and People in Berlin III: Reusing formal industral Buildings”